It is hard to believe that we are already more than half way through the secondment.  Time seems to be flying by.

This week I would like to start by acknowledging Sorry Day, which is also, by coincidence, my wedding anniversary – 26 May. Sorry Day has been commemorated since 1998, a year after the release of a report titled ‘Bringing them home’, which addressed the systemic removal of Indigenous children from their parents. This government policy was a designed as a means to attempt to assimilate the younger generations into white society. This is my potted summary – there is a lot more information located in this article on the SBS website  – What is Sorry Day. This is an excerpt from the article:

The first Sorry Day was held in 1998, one year after the report ‘Bringing them Home’ was first tabled in parliament.

The report, which resulted from a Human Rights and Equal Opportunity Commission inquiry, documented the forced removal of many Aboriginal and Torres Strait Islander children from their families, between 1910 and the 1970s. The children who were removed have come to be known as the Stolen Generations.

Sorry Day is a day of respect and recognition for the suffering and pain of Aboriginal and Torres Strait Islander peoples, which continues to have an impact today for many people and communities. It is also a day that focuses on reconciliation with a focus on moving forward in unity.

On Monday, we gathered at Monash Park to commemorate Sorry Day. The traditional ‘Welcome to Country’ was given by YYNAC’s lovely Aretha Briggs in Yorta Yorta language. The event featured many speakers and included performances from Batja Malnigan dance group and didgeridoo player Sonny Cooper. There were a number of school groups who participated in the event, by speaking and painting the beautiful hands pictured below.

I remember attending the first Sorry Day commemoration when I lived in Brisbane in 1998, where the ‘Sea of hands’ came to represent people’s commitment to reconciliation. Here is a picture from one of my cowgrrls collaborators Jo Cruickshanks of the 120, 000 hands at the Botanical Gardens.

Back to the Shepparton’s events – here is a picture of the boys dancing. 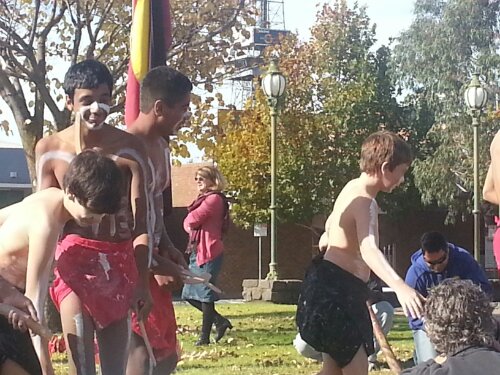 I have also pasted a video from The Shepparton News – the story was titled Shepparton joins nation in saying sorry.

To sum up, the last week was focused on progressing my projects for YYNAC with the development of an Intranet content map and some wireframes for first and second level pages. There was also lots of great discussions around some of the creative projects happening in the community, which might form some later blog posts.

The week ended with a journey to Melbourne, which was organised by my beloved husband Marty to celebrate our first wedding anniversary. We stayed in a fabulous room at the Novatel in Collins St, which had an amazing view outside the window (more of a glass wall). One of my friends on Facebook called it a ‘submerged metropolis’, quite a nice descripton. 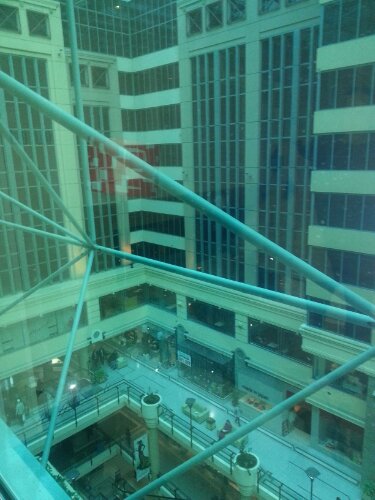 View from a room

Our weekend involved an adventure to Fitzroy on Saturday and St Kilda on Sunday, with a performance at the Butterfly Club on Saturday night. The show was titled ‘Storm in a D Cup‘, a one woman show by Amelia Ryan, and although I was skeptical of the content, it was very funny and entertaining cabaret style show.

Brunswick St, Fitzroy – one of the best places to people watch

Anyway, this weeks calendar should be interesting with a number of events as part of reconciliation week – check out this article in the Shepparton News.