August 14 TO 17
Contributed by Gerald Maclean

14 August 2014
Another very hot day and I am exhausted from doing little or nothing. Ercihan spent several hours on the phone to the heads of the various jandarma forces (state rather than municipal police) with whom we anticipated making regular contact along the way). A box of T-shirts and some saddle blankets from our new sponsors with their logo arrived. In the evening Jude arrived from Oregon to join the 2014 team of riders. Originally from the UK, Jude Vawter currently breeds Akhal-teke horses at the Page Creek Ranch. 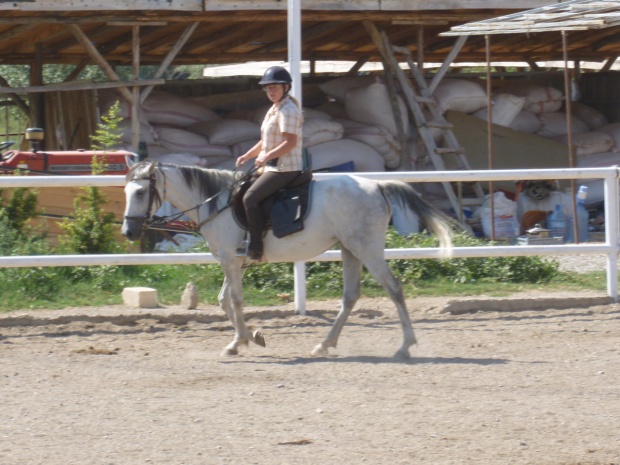 16 August, Juno with Zorlu in the ring

15 August 2014
Two more of the team arrived from the US. Susan flew in with her good friend Ann Hume, who rode the EÇW in 2010 and fell in love with the Turkish countryside. There are still delays to airline schedules across Turkey. One of Ann’s bags and some new saddles that Susan bought in the States have failed to arrive. There is now only Jean Matton to arrive from Belgium to complete the group planning to ride. His flight to Kayseri is supposed to get in tomorrow evening. Everyone expects delays.

16 August 2014
Well, it is now looking like plans to send regular posts to Tracey, along with photos, is destined to be something of a problem. The first intimation was discovering, on arrival at the ranch that the red pen I had brought to keep notes does not work. Abandoning thoughts of keeping longhand notes, this morning I found that the laptop may have developed a new glitch, one that tells the internet to switch itself off seconds after switching on.though Ann tells me this may simply be a problem with the strength of the signal and that seems likely.

This morning Ann, Jude and Donna went off with Ercihan to see how they liked their assigned horses – Ann on Kelebek (‘Butterfly’), Jude on Zorlu (‘Difficulty’), and Donna on Aşgar. Susan joined them on her horse Juno. 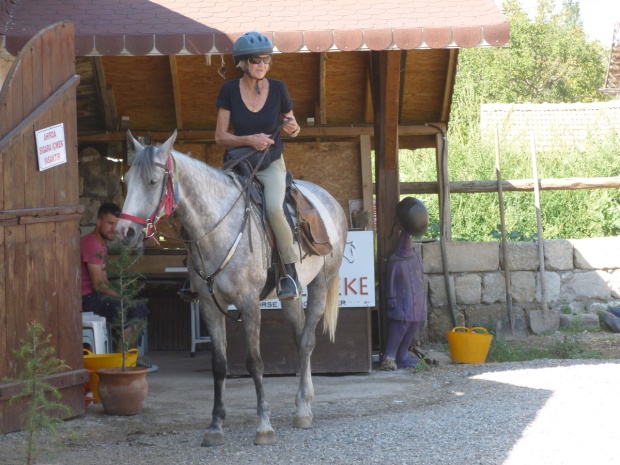 16 August, Ann stays in the shade with Kelebek 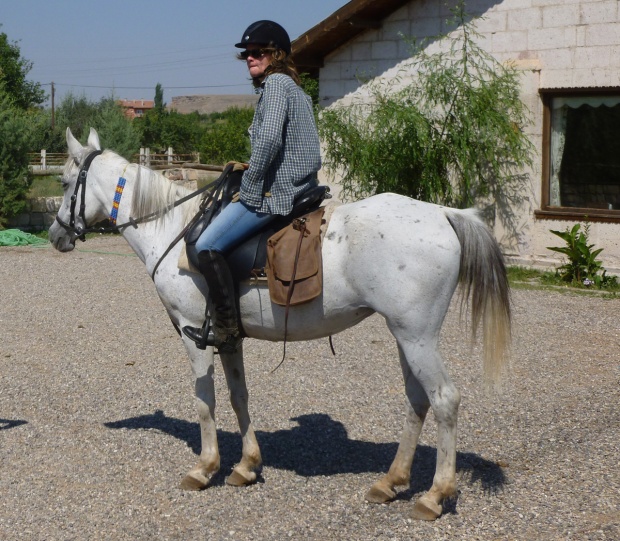 At dinner this evening, with all the riders except Jean – yes, his flight was delayed and he would not be in Avanos until about 4am – we shared memories of ‘things that go wrong on horseback riding holidays.’ We quickly agreed that our most vivid memories of this kind were invariably about the personality of one or more of the group riding. And now we had all met, we were pretty certain that we would not have that sort of difficulty on this trip. Anyone who willingly sets out to ride across Central Anatolia in the heat of the summer was unlikely to be a whinger. All of us had travelled this way before and knew what to expect, and what to dread. All of us at one time or another had been on equestrian camping expeditions in company with Susan, who had hand-picked the riders for this trip.

Amidst the various activities and unanticipated complications, these days have been hot, cooling off only after 5pm in the evening to below 30 celsius. I know I won’t be able to take the heat and direct sun at these kinds of temperatures, so will set out with the support team tomorrow, driving the mini-bus. 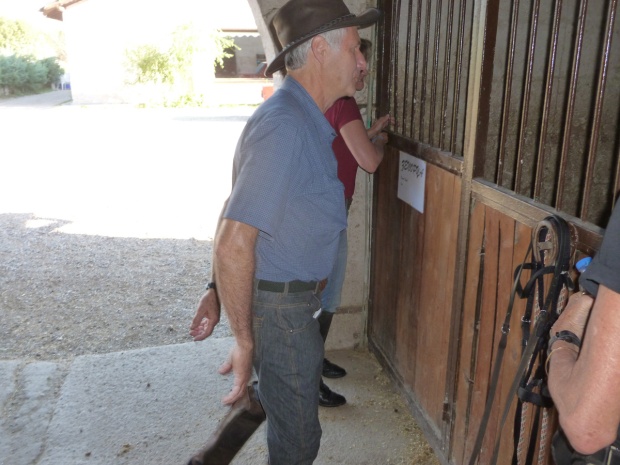 17 August 2014
Now that he is here, all are agreed that Jean is certain to be a good member of the group and he has the right sense of humour about being among so many women. Anyone so eager to get going after less than four hours sleep following airport delays is certainly no whinger! But whingers are easy enough to find, especially in the pages of sites like TripAdvisor.

I’ve recently been reading a lot of nineteenth-century travel writing by Brits who travelled across Turkey, or the Ottoman Empire as some more correctly termed the region, and a surprising number of them were whingers. Many of them were going further east into Persia and Kurdistan and beyond. Like Evliya, these were writers who travelled by horse, and there were a lot of them, including some women. Trains and steam ships were rapidly making parts of what we now call the Middle East increasingly available to new kinds of European traveller. A new class distinction was in the making, one we now hear at work whenever someone talks of being a ‘traveller’ and not a ‘tourist.’ Except in extreme cases – choosing a package holiday to the sun is obviously different from setting out to hike the Himalayas – it can be a rather vague and fuzzy distinction, but one that attracts believers. I strongly suspect it inspired some of the writers I have been reading to travel by horse and write about it in order to stake a claim to a more traditional and certainly more arduous form of travelling than those earliest ‘tourists’ on organized group tours of Constantinople or the Holy Land. Whether diplomats or missionaries, military types exploring overland routes to India, archaeologists intent on finding the next big site with important (ie having a high market value) relics of some bygone age, or those who travelled simply because they could, all who published memoirs and narratives of their equestrian journeys east shared one thing besides a love of horses. The single most recurrent topic, one that regularly becomes a repeated theme for some of these writers, is the impossibility of leaving camp on time. 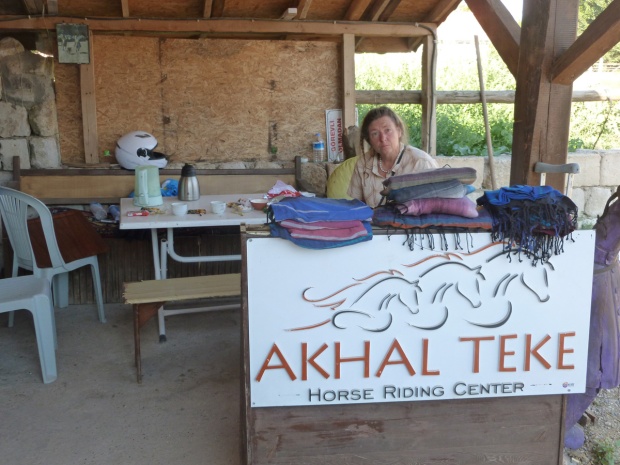 17 August, Jude waits in the shade

I don’t know if anyone believed that horses and riders would actually manage to leave the ranch at 8:30am as planned. In the end, it was close to 10:00am and close to approaching 30 degrees when the riders posed for a group photo or two before striking out for the national park at Göreme, where the support team would be waiting with lunch for horses and riders. 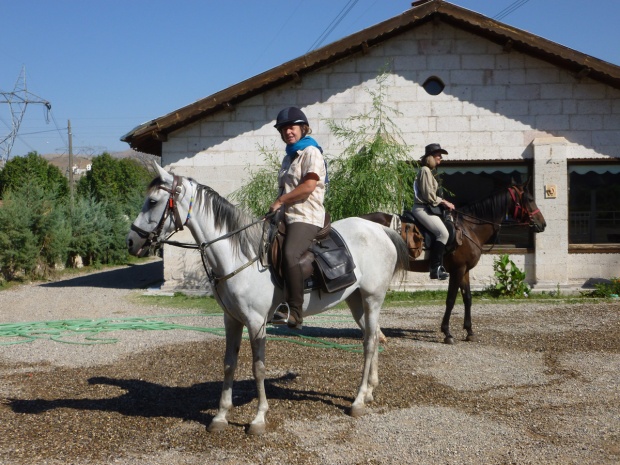 17 August, ready to go Zorlu and Asgar with riders 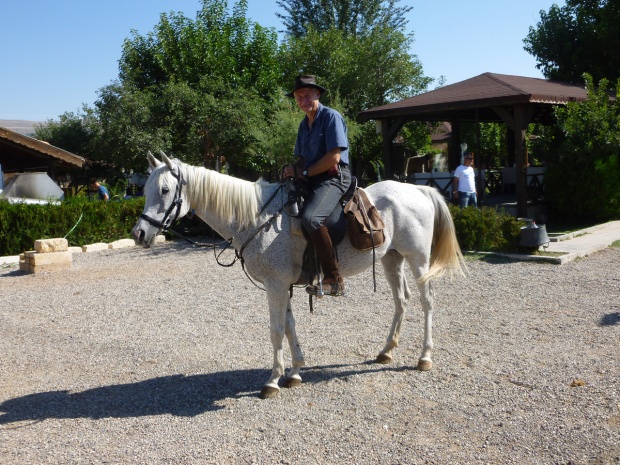 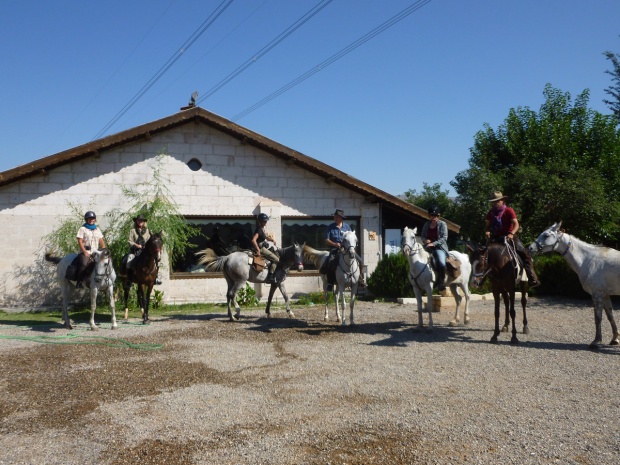 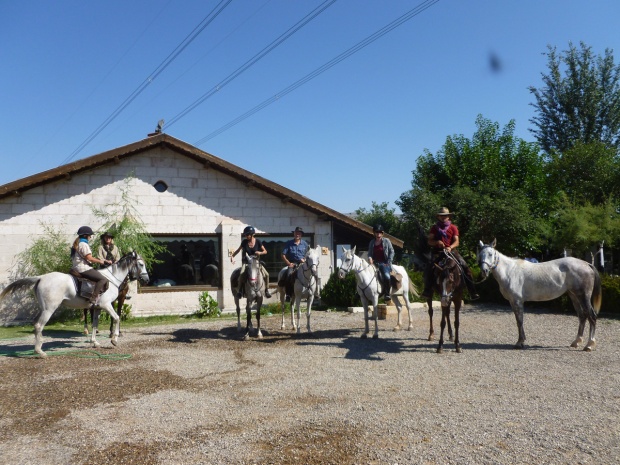 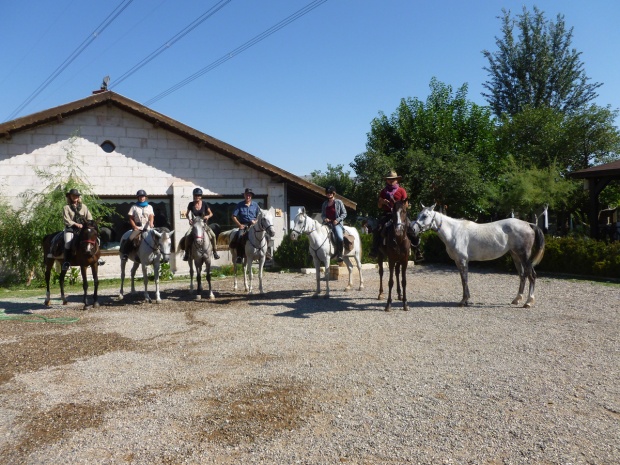