A Day in the Life of Kathmandu

‘There’s a one-eyed yellow idol to the north of Kathmandu,
There’s a little marble cross below the town;
There’s a broken-hearted woman tends the grave of Mad Carew,
And the Yellow God forever gazes down.’

The above poem is set in Nepal (‘to the north of Kathmandu’), during the British Raj and tells the tale of a wild young officer known as ‘Mad Carew’, who steals the ‘green eye’ of a ‘yellow god’ (presumably an emerald in a gold statue) to impress his beloved. He is wounded in the course of the robbery, and later murdered, presumably by a devotee of the god for the theft, who returns the jewel to the idol.

Like the Khyber Pass, Kathmandu is a romantic legend that lives up to its reputation for the exotic and adventurous. I was first there in 1991 when I was about to start a six week trek to Everest Base Camp via the newly opened Arun Valley route. When we joined the main route we were struck by the difference between a ‘virgin’ route and the old tracks near Lukla – the amount of trash was incredible.
When I returned from the trek I had a few days in Kathmandu to fossick around with my 35mm Nikons & a Widelux Panoramic camera that produced a 50 x 24mm panoramic shot.

For camera buffs at a cost of around $A2000 in 1991 it had a unique film transport system – the film went around the curve and the lens travelled from one side to the other around the central tower slit. The quality was brilliant as shown on this detail of my shot of Everest (the black bastard) and Chimu (from Kalapatar). And another advantage was that unlike battery powered cameras it didn’t freeze up. 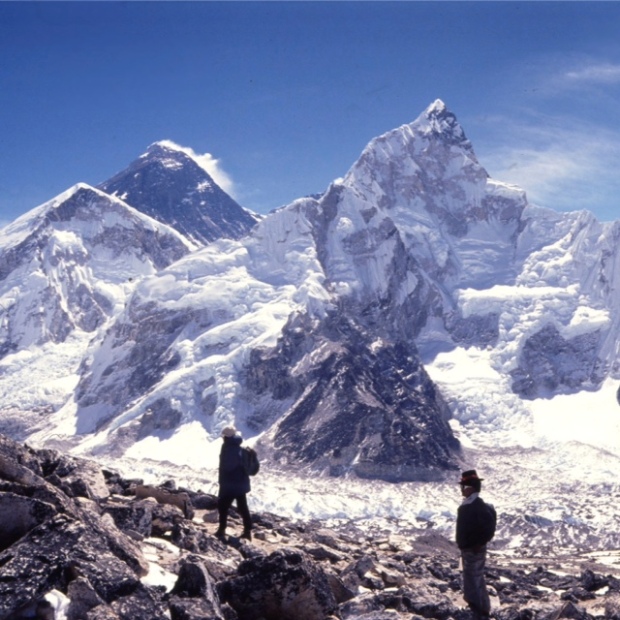 Back to the point. I took the following photos whilst walking around the byways of Kathmandu, trying to get the image, sound and smell of this strangely medieval looking city.

Kathmandu is the capital and largest urban centre of Nepal. The urban city astrides the Kathmandu Valley and consists of Kathmandu Metropolitan City at its core, and its sister cities Patan, Kirtipur, Thimi, and Bhaktapur.

Kathmandu is the gateway to tourism in Nepal. It is also the nerve center of the country’s economy as it has the most advanced urban infrastructure in Nepal. Although tourism in Kathmandu declined during a period of Maoist political unrest, today it is much improved. For example, in 2013, Kathmandu was ranked third among the top 10 travel destinations on the rise in the world by Trip Advisor, and ranked first in Asia.

The city has a rich history, spanning nearly 2000 years, as inferred from inscriptions found in the valley. Religious and cultural festivities form a major part of the lives of people residing in Kathmandu. Hinduism and Buddhism are the most popular religions in Kathmandu. There are people of other religious beliefs as well, giving Kathmandu a cosmopolitan culture. Nepali is the most commonly spoken language in the city and English is understood by Kathmandu’s educated residents.

Nepal has faced significant political unrest over recent years, which travellers should be aware of before they take the journey to Nepal. Its troubled history includes the 2001 massacre of the royal family, where the heir to the throne, Prince Dipendra, killed nine members of his family and shot himself. The dead included King Birendra of Nepal and Queen Aishwarya.

Upon the death of his father, Prince Dipendra became de jure King of Nepal though died after three days after the massacre as a result of his injuries.

A few years ago, the political parties of Nepal agreed on forming an interim government under the leadership of Chief Justice Khil Raj Regmi. Constituent Assembly elections were held on 19 November 2013 to end the political deadlock. The second election for the constituent assembly was held successfully and Sushil Koirala was appointed the new prime minister.

This Advice was last issued on Wednesday, 19 February 2014. It contains new information under Summary and Local travel (on 16 February 2014, a Nepal Airlines plane crashed in western Nepal, killing all 18 people on board). We continue to advise Australians to exercise a high degree of caution in Nepal due to the uncertain political and security situation.

Although Nepal is a country where western tourists do need to be very careful, it is still an incredible place.