Tonight we were very privileged to be invited to the preview of emerging playwright Sue Walker, titled Turning Tables. The play is being held at the Art Shed of the Bendigo Theatre Company.

I will say up front that I am a friend of Sue Walker. I was very fortunate to work with Sue last year when I was seconded to the Yorta Yorta Nation Aboriginal Corporation and we became good friends – sun sisters we call each other. It was a strange combination of having creative passions outside of the 9-to-5, a belief in the workings of the universe and a united love of the ridiculous that somehow cemented our relationship. During the time we worked together, we formed a bond that we knew would continue long after the 6 week secondment.

Sue had given me a copy of the script last year when we were working together, so I had a good sense of the story but for some reason to see it live gave me an entirely different perspective on the story; as it literally ‘came to life’.

Now I am no theatre critic by any means, but I love a good story and strong characters, especially female characters. Turning Tables has all of this. Add in a stellar cast and you have an evening of tears and laughter with a conclusion that makes you believe that there is justice in the world. The story centres around the family matriarch Ettie, who is dying. Despite efforts to diminish her authority by a number of family members, she is able to have the last word, and does it ‘her’ way. Margaret Trainor who plays Ettie is delightful in the role as the straight talking, whisky sneaking, sharp as a whip protagonist. I could not help thinking of my own Yorkshire born grandmother who is now 93 and very frail but who still manages to call the shots. There is a big message about respect in this play – respect for each other and respect for the wisdom of elders. In a society where age equates with diminished human value, this is a refreshing point of view.

The set design is sumptuous, flowers in vases, a mantle filled with family pictures and a gorgeous leather couch which is the centre of the action. What is really lovely is that the mantle is filled with pictures of the cast and Sue’s family in years gone past, which speaks of Sue’s sharing nature. On the sideboard there is a photograph of the real Ettie, Sue’s Irish great-grandmother, watching on with approval I am sure. 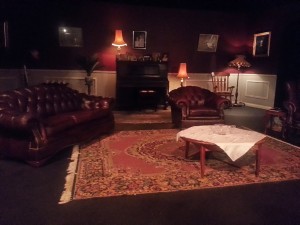 Sue Walker is a wordsmith who has an uncanny ability to understand the intricate workings of family and the human condition: telling the story with both humour and heart. That is no mean feat. I see big things for Sue’s future as a playwright and who knows; maybe I will be seeing her next play in London’s West End. Now there’s a nice idea 🙂

It was a great night, meeting lots of lovely people and catching up with some familiar faces. Also met the local MP, Lisa Chesters who seemed to have a great time at the play.

The play opens to the public on May 9 and continues until May 16. If you get in quick, you can win tickets to the opening by liking a post on the Bendigo Theatre Company’s Facebook Page. 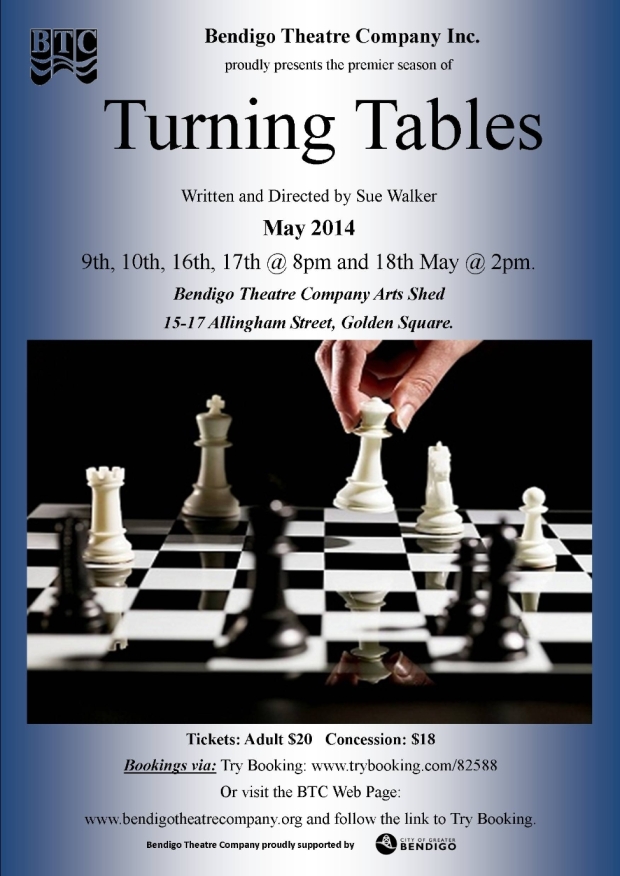 4 thoughts on “Review: Turning Tables – A Play by Sue Walker”