Today, I am continuing the journey along the Great Ocean Road, to the very pretty beach town of Lorne.

Lorne is famous for a couple of things aside from its natural beauty, popularity as a seaside resort, proximity to GOR and Great Otway National Park. It is also home to the Falls Music & Arts Festival which occurs over the New Years long weekend every year, and the Lorne Sculpture Biennial, most recently held in March 2014.

The Falls Festival is best known for contemporary music performances, dance, comedy, theatre, circus, cabaret, as well as other art forms. Because the event runs over three days, people bring a tent and camp out at the event. The festival started in 1993, with a small one day concert called the Rock Above The Falls. This initial event attracted nearly 11,000 people, far exceeding the organisers expectations, and the organisers quickly negotiated the use of neighbouring land to accommodate the crowd. Since this humble start, the Falls Festival is now in three locations – Lorne, Byron Bay NSW and Marion Bay in Tasmania. 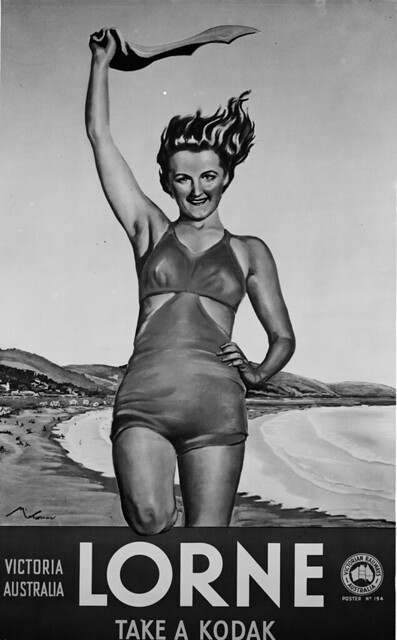 Lorne has long been a place that attracts creative people as well as beach lovers. For example, In 1891, the area was visited by Rudyard Kipling who was inspired to write the poem Flowers, which included the line:

Buy my hot-wood clematis,
Buy a frond of fern,
Gathered where the Erskine leaps
Down the road to Lorne.

Mr Wikipedia says about the area prior to European settlement:

Lorne was part of the traditional lands of the Gadubanud or King Parrot people of the Cape Otway coast according to Ian Clark, although many popular websites report that the area was occupied by the Kolakngat Aborigines.

Given that there is some conflicting information about the pre-European occupation, I am interested to find out more on this subject. The text referred to is listed below as a reference.

We loved seeing Lorne and it is a town definitely worth visiting and exploring as part of the Great Ocean Road journey.