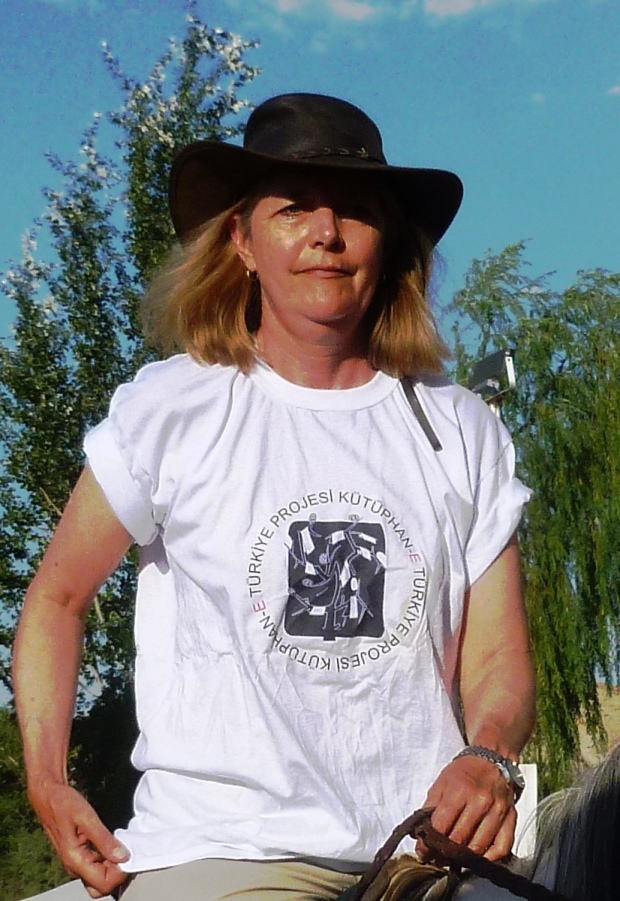 Starting out on an expedition is always nerve-wracking. In Turkey it is also always late, or at least several hours later than it might have been. And in mid-August, every delay means the sun is higher and hotter in the cloudless blue.

Asgar and Kelebek waiting for things to start

Today’s getaway was complicated by the coincidence of another riding tour heading out from the ranch, the popular Cappadocia Highlights, which drew riders from the riding holiday companies In the Saddle (UK) and Equitours (USA). We would set off together, take different routes, and meet again at lunchtime near the White Valley. Climbing up into the hills above Avanos, heading westward before turning south across the river, we caught glimpses of each other when we stopped to water the horses.

It was morning still but already the heat was making its presence felt. Once across the river by the western-most Avanos bridge, we entered the badlands, looking out for shade and water as we went. After a quarry or two – everywhere in Turkey there seem to be quarries, for road-building, construction, tile-making — we headed through narrow defiles, following small water courses that cut their way through the volcanic tufa that gives the area its distinctive features. A big black jack donkey was tethered by a stream. He couldn’t believe his luck that so many mares were passing and worked himself into a powerful braying fit. The mares, however, took no notice and walked sedately on.

We came upon a Turkish couple with their vehicle parked near a spring, enjoying that simplest of pleasures, sharing a patch of shade under a rocky cliff and cool spring water. A rabbit bounded across our path. Clouds shrouded the sun, briefly.

We hit an undulating chalky track across country – perfect for a pipe-opener. What began as a canter turned swiftly into a gallop as was likely to happen with horses that had been in training and fed to prime fitness. Now we would see how well we could all travel at speed. I was pleased that Aşgar listened, coming back to me when asked, and steadying into a good hunting pace. While the leaders disappeared over a rise, we carried on freely, the reins light in hand. Then on the next downhill we increased our speed, to feel what we could do. She flew. She neither pulled nor took a strong hold. All her paces were elastic and comfortable, and galloping flat-out was as smooth as a river flowing. She was unfussed by being seemingly alone with me in that fantastic landscape. When we caught up with the others and the dust had settled, the sun once again blazing overhead, I was confident that we would go well together over whatever terrain and at whatever pace was required.

We skirted Göreme just after Turkish mid-day (yarim: 12:30), crossing two roads and passing a roadside restaurant, where we turned to trot along the tree-lined sandy track of the Zemi Valley near the El Nazar Kilisesi (church). After a mile we turned into a shady glade where the horses could graze in the undergrowth. This first lunch stop was hosted by our expedition crew of Yunus Emre, Mevlut, and Ahmet 2 (‘CanCan’, JonJon), and we were eventually joined by the Cappadocia Highlights riders, led by Ahmet 1 and Raphaëlle Lachèze. There was much interest amongst the group in Mac’s forthcoming book about the outgoing Turkish president, Abdullah Gül, who was born on Turkish Independence Day in 1950, the first year that there were multiparty elections. His is a Midnight’s Children story. His family origins lie in Kayseri, one of the ‘Anatolian Tiger’ towns of Turkey’s economic boom and conservative reform movement, but also include summer holidays in Izmir, a secular Aegean stronghold. Gül studied and learned English in England, got a PhD in economics in Turkey, was an academic economist in Turkey and then an Islamic banker in Jeddah, Saudi Arabia, before becoming caught up in Turkish politics as an MP for Kayseri, eventually a representative to the Council of Europe, briefly Prime Minister for the ruling AK party, and then President. Abdullah Gül and the Making of the New Turkey (Oneworld, 2014) traces the fortunes of how Gül’s and his party’s rise to power has brought about a seismic shift in the distribution of wealth and political clout, for the first time tilting towards benefiting the inhabitants of the Anatolian heartland though which we were riding. What might we learn from observing the effects of these policies?

After a late lunch of meze and a tomatoey pasta dish in the shade, topped off by watermelon, we set off when shadows were beginning to lengthen to ride through the spectacular White Valley and on to Ortahisar en route to our designated campsite at Ibrahimpaşa. Accompanied by shadow horses and riders in silhouette against the white tufa cones and phalluses, we scaled heights to peer into immaculate vineyards and small cultivated fields. Here we had glimpses once again of the unspoiled Cappadocia of 20 years ago, when Mac and I first came to ride here.

We clattered into Ortahisar as the sun was turning to that golden hour when the local stone glows with the fading heat of the day. Watering the horses at a çeşme, a fountain with a yalak, an attached trough, we savoured freshly squeezed orange and grapefruit juice from the village square, and bought dried fruit, apricots and figs, to carry in our saddle bags. Turkish horses love fruit in any form. I wished I had bought at least half a kilo when I saw how eager Aşgar was to help me devour the kayısı and incur.

Passing flat-fronted and sometimes flat-roofed stone houses, a style we would continue to see in remote villages on subsequent days, and which in Cappadocia is acknowledged to be ‘Greek’, we swept downhill through Ortahisar and then along until we rounded the turn to glimpse Ibrahimpaşa, another but much smaller stone-built village, seemingly carved from the tufa, clinging to its own cliffside in the gathering dusk. We didn’t know it yet but this campsite would not be so much camping as glamping.

We were to stay at the small ranch of ‘Bombacı’ Adem Bey, a fellow horselover, near his and his wife’s Babayan Evi hotel and restaurant. A clean sandy corral for the horses where they could relish their beautiful yonca, alfalfa hay, and their high protein muesli mix from Zeytinoğlu Yem. And a cave house with guest rooms and an outdoor dining table for us. The meal was fantastic, prepared by Adem’s wife, a noted chef. There were even squash flowers, a rare delicacy, as well as fresh vegetables and fruit, and two delicious meat stews, one of cumin-laced lamb and one of beef with chick peas. The arduousness of actually camping was yet to come.