Wikipedia defines topography as “Topography (from Greek τόπος topos, “place”, and γράφω graphō, “write”) is a field of planetary science comprising the study of surface shape and features of the Earth and other observable astronomical objects including planets, moons, and asteroids. It is also the description of such surface shapes and features”.  As a cartographer with many years of experience in the production of topographic maps I think of topography as the depiction of the land-form (surface shape) on a map in relation to other relevant surface detail such as roads, railways, buildings, vegetation, drainage and coastline, along with relevant names and terms (nomenclature).

Land-form can be depicted in several ways on a map such as spot elevations, hill shading or contours or a combination. The most common form of depiction of land-form is the use of contours. There is are also other symbols (Map Symbology) that can be used in combination with contours to show other features such as cliff lines, overhangs, depressions, sink holes and caves.

Topographic maps are produced at many different scales (Map Scale) are used wherever land-form is important such as agriculture, mining, and for navigation and recreation such as bushwalking and orienteering.

These days Geographic Information Systems and other mapping software can be used to convert topographic height information into three dimensional models of the earth’s surface over which surface imagery or maps can be draped. 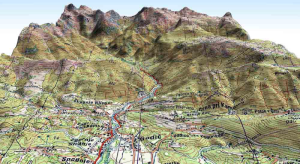