The past week has been a week of learning and sharing. I am not sure where to start with this post as so much has happened. Although I only spent two days in the office, I think I am starting to make some progress with my projects, as I have produced some draft documents for comment, a social media strategy and a scoping paper for my project brief.

On Tuesday we were invited to go to Cumeragunja to participate in the weekly ladies craft get together. We met quite a few women from the community and made some cards and pages for photo albums. Cumeragunja (might be a familiar name for people who have seen the Sapphires) is nestled close to the river Murray, just over the border in NSW. It is a place with a very interesting history as the people walked off Cumeragunja in 1939. Although it is not formally recognised as a ‘remote community’, it is certainly remote and geographically located on the very edge of NSW because of being so close to the Murray River.

On Thursday and Friday we went on our camping trip – which is an essential part of a Jawun secondment. The journey started with another visit to Cumeragunja, where we were met by one of the elders, Sharon Atkinson who talked to us about the history of the health centre at Cumera (as it is affectionately known). Sharon also gave us a tour of inside the old school where there are lots of cultural and historical artefacts. It was also really interesting that Sharon mentioned that there is going to be a multimedia exhibition at the school later this year. The project is titled ‘Kaiela Dreaming’ and you can contribute to the project vis pozible, check out Kaiela Dreaming multimedia art installation

Display cabinets inside the old school at Cumeragunja

Here are some images from inside the old school. 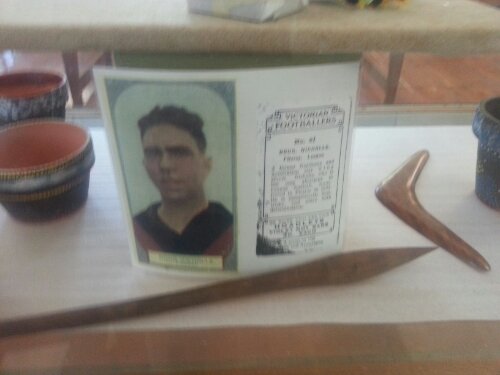 Display cabinets at the old school

Sharon, along with Lois Peeler and Heather Rowe are the authors of a comprehensive text on Yorta Yorta language and culture. The book is titled  Yorta Yorta Language Heritage.

Display cabinets at the old school

Here is a picture of Sharon with Lyn and me.

After our tour and talk with Sharon we headed off to the Barmah National Park, where we met with some more elders, Rueben, Sam, Ron and Rob who cooked us a delicious bush tucker meal of fish cooked in clay and damper, hot cakes and johnny cakes. It was really fascinating to see the process of cooking the fish in clay. Although the fish was Barramundi from a nearby fish farm, was not exactly traditional fare but still really yummy! 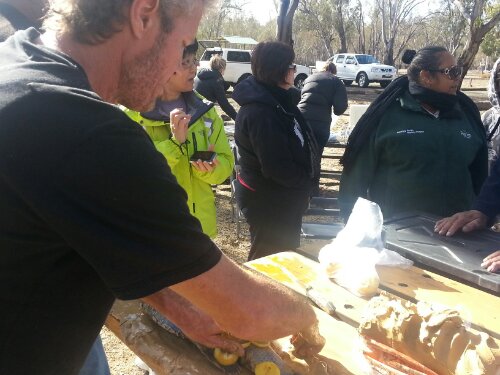 Above is a picture of Ron working hard to prepare the fish. Below is the fish – cooked and ready to be devoured.

Here is a picture of Sam posing with his delicious damper. That didn’t last long either!

Sam with his delicious damper

After a long and relaxing lunch at Barmah, one of the Yorta Yorta rangers from Parks Victoria took us through the Dharnya Centre, which is a beatiful building located in the national park and designed as a cultural centre for visitors to learn about Yorta Yorta culture and for the Yorta Yorta people to meet and educate the young people in the community.

We then ventured further east where we finally arrived at Yielima, where we were invited to stay on traditional lands close to the river. The land at Yielima was purchased by the Yorta Yorta community so people could reconnect with country. As you can see from the photograph below, it is a beautiful place, close to the Murray River. We met some more elders at Yielima and then went about setting up camp for the night. Some of the secondees braved sleeping in swags, however I was a bit of a wimp and stayed in the tent 🙂

View of the Murray at Yielima

After we settled in, the secondees went about the task of preparing dinner, a beef and vegetable stew.

After dinner, we settled in around the campfire to talk, share stories and even a sing along. I just wish I knew more old country and western tunes! For my part there was lots of ‘la la la’ in between the odd word.

It was a really special time and I loved spending time meeting people and sharing stories. Thank you so much to everyone who so generously shared their time with us. A big thanks to our Jawun organisers Liana and Wayne who worked so hard ot make this happen. Also a big thank you to all the people from the Yorta Yorta community for sharing your stories and giving us some insights into culture. A special thanks also to the guys Reuben, Rob, Rod and Sam, who we didn’t get to say thank you to in person on Friday.